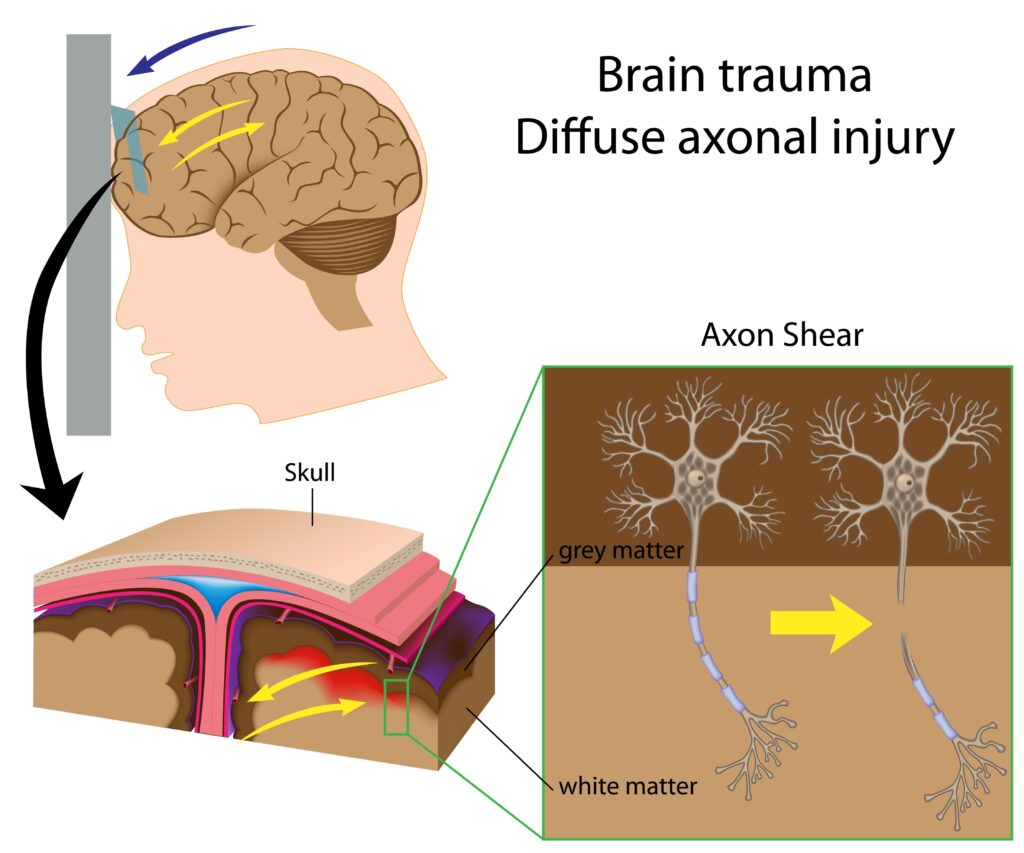 Diffuse axonal injury (‘DAI”), is a common type of traumatic brain injury that results from a traumatic  stretching, disruption and eventual separation of the axons or nerve fibers in the brain.  This injury is usually caused by rotational forces at impact which can cause shearing in the white matter of the brain.  Frequently, these traumatic brain injuries are seen in acceleration/deceleration forces to the brain. (See Figure 1 above).

When acceleration/deceleration occurs, the brain moves within the skull and the parts of the nerve cells that allow neurons to send messages between them are disrupted. As tissue slides over tissue, a shearing injury occurs.  DAI also causes brain cells to die, which causes swelling in the brain and can lead to further injury and damage.

DAI usually consist of several focal white-matter lesions measuring 1-15mm.  Unlike focal Coup-Contra Coup injuries which are usually focal in one area, DAI can be scattered throughout the white matter. (See Figure 2 above).

DAI can be difficult to diagnose since it does not show up well on a CAT scan.  High field MRI is more useful than a CT scan, particularly if diffusion tensor imaging is utilized to measure the fiber tracts in the white matter.  The degree of microscopic injury is usually considered to be greater than that seen on diagnostic imaging and the clinical findings reflect this point.

Often, DAI is a result of secondary biochemical reactions to injury in the brain, it can have a delayed onset such that a person who initially appears well may deteriorate later.  The frontal and temporal lobes of the brain are the most likely to be injured in DAI.  Other common locations include the cerebral cortex and deep hemispheric nuclei and the junction of the white and grey matter.

DAI has no specific treatment beyond what is usually undertaken for any type of head injury.  This includes managing and limiting intracranial pressure and stabilizing the patient.