Damages in a Personal Injury Action 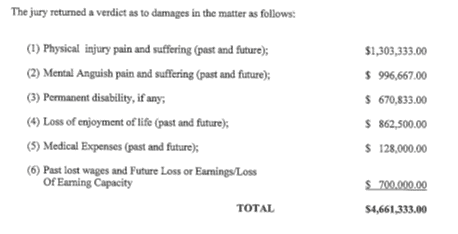 In a personal injury action, a plaintiff must prove that more likely so than not the defendant was negligent, that the defendant’s negligence caused injuries and damages to the plaintiff, and the amount of those damages that were caused by the defendant’s proven negligence.  In other articles of this section, liability and causation were discussed.

We have all heard of the old saying “no harm, no foul.” This phrase originated in the game of basketball when it was first described in the Hartford Courant newspaper in 1956.  By the early 1970’s the term was being applied to legal situations.  In short, the phrase means that no damage has been done by a person’s mistake.

In a personal injury action, the plaintiff must prove by a preponderance of the evidence (more likely so than not), the amount of injury and damages sustained by the defendant’s negligence.  Damages may be divided into three basic categories in a personal injury matter:

General or Non-economic damages have been defined as those damages which may not be fixed with any degree of monetary exactitude.  They include:

Special or Economic damages are damages that are more susceptible to being calculated.  These damages include:

Punitive Damages are damages designed to punish a defendant in an effort to deter future bad conduct. Many states do not allow a plaintiff to recover punitive damages in a personal injury matter, including Louisiana.  In the states that do allow for the recovery of punitive damages, a plaintiff must prove that the defendant acted with reckless indifference to the rights of others and/or that the defendant’s conduct was willful, wanton and reckless.  And many states require that punitive damages be proven by clear and convincing evidence, which is a standard much higher than a mere preponderance of the evidence (something is more likely true than not).