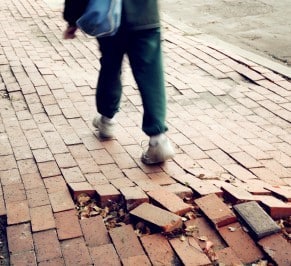 According to the National Highway Transportation Safety Administration, annually, around 4,500 pedestrians are killed in traffic crashes with motor vehicles in the United States.  Many of these accidents are preventable.  Providing walkways separated from the travel lanes could help prevent up to 88% of these walking along roadway crashes.

According to the Federal Highway Administration, sidewalks separated from the roadway are the preferred accommodation for pedestrians.  Sidewalks provide many benefits including, safety, mobility and healthier communities. Roadways without sidewalks are more than twice as likely to have pedestrian crashes as sites with sidewalks on both sides of the street.

But what happens when those sidewalks are not built and/or maintained properly?  Some common types of defective sidewalks include:

In many cases the injury is a direct result of a municipality failing to institute and/or conscientiously follow its own policies regarding inspection, maintenance, and repair of miles of sidewalks.

Maintenance and repair of public and private sidewalks is generally the responsibility of the owner of the sidewalk.  This could be an individual, a business or a homeowner’s association or a local governmental authority.

Some typical municipal codes provide laws that require the proper upkeep of sidewalks:

No owner of property, improved or unimproved, abutting on a public sidewalk, shall permit the sidewalk to deteriorate to such a condition that, because of cracks, chipping, weeds, settling, covering by dirt, or other similar occurrences, the sidewalk becomes a hazard to persons using it