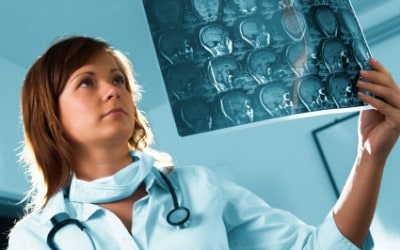 Cancer is a group of more than 100 different diseases.  Cancer occurs when cells become abnormal and keep dividing and forming more cells without control.  If cells divide when new cells are not needed, a mass of excess tissue called a tumor is formed. Tumors can be either benign or non cancerous or malignant, cancerous.  Cancer cells often invade nearby tissues or travel through the bloodstream to form new tumors in other body parts.  The spread of cancer is called metastasis.

Some of the most common warning signs of cancer include change in bowel or bladder habits, unusual bleeding or discharge, thickening or lump in a body part, indigestion or difficulty swallowing, nagging cough or hoarseness.

A biopsy is the only sure method to know if cancer exists.  During a biopsy, the physician removes a part of the tissue and examines it under a microscope to see if cancer cells are present.  Cancer is treated with surgery, radiation therapy, chemotherapy, hormone therapy, or biological therapy.

Some common types of cancer include colon cancer, rectal cancer, lung cancer, breast cancer, skin cancer, brain tumor, cancer of the uterus, cervical cancer, pancreatic cancer, Hodgkin’s disease, lymphoma, leukemia and prostate cancer.  Usually, early detection is the key to most successful outcomes.  The more the disease is allowed to develop without treatment, the greater the likelihood of spreading.

Today, there are many screening tests physicians utilize for early detection of cancer.  For instance, yearly pap smears and mammograms are valuable tools to detect cervical and breast cancer in women over 40.  Mammography every six months may be the standard of care when fibrous or other suspicious tissue appears on a mammogram.

Cancers can be missed when these important early detection tests are not properly administered or when they are not ordered because of cost considerations.  Mammograms can be misinterpreted or misread by a radiologist often leading to an enlargement or spread of breast cancer.  Important signs like unexplained extensive weight loss, or enlargement of lymph nodes can also be missed.  Finally, a biopsy which is misread or which does not properly sample the suspicious tissue in question is another way cancer can be missed.

If you or someone you know has cancer which you believe should have or could have been diagnosed sooner than it was, call The Cochran Firm New Orleans  toll free for your free consultation at 1-866-599-0022, or click on our Free Case Review icon.