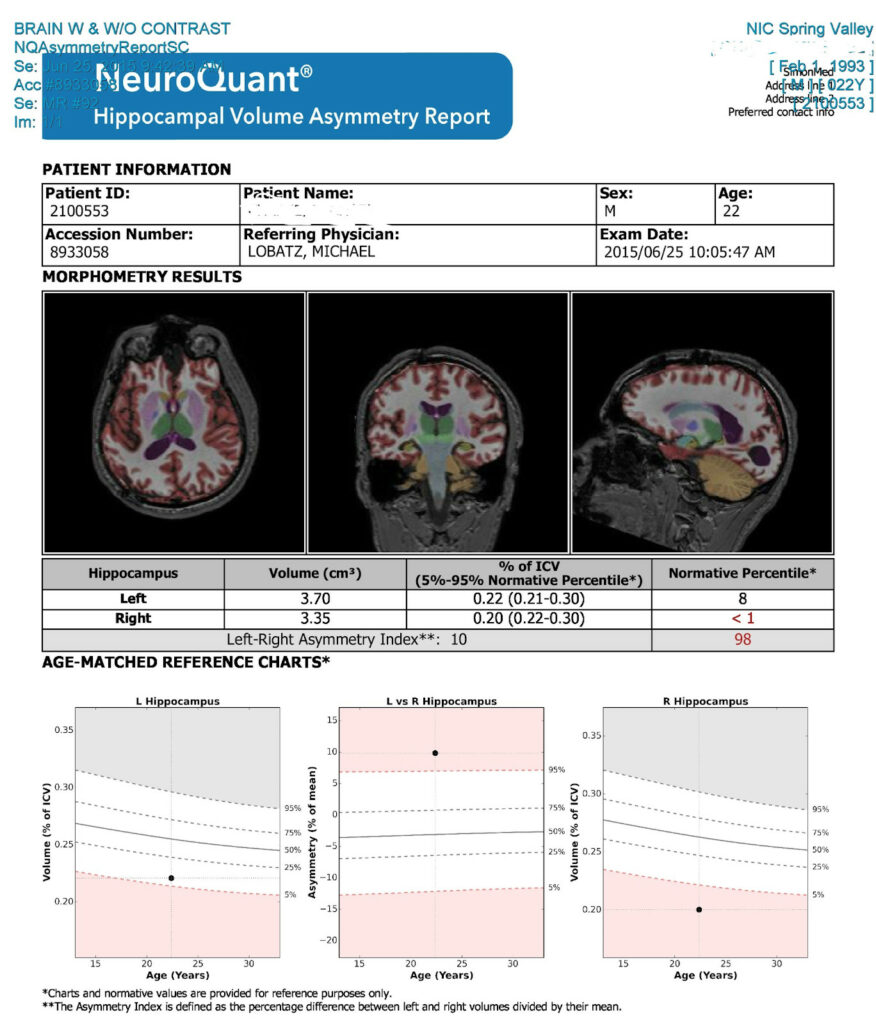 One of the known long-term issues suffered by patients with TBI is brain atrophy, or shrinkage of brain tissues.  Specifically, atrophy to one of the brain’s structures, the hippocampus, is known to occur in some TBI’s.   The Hippocampus is a major component of the brain and plays an important role in the storage of long-term memory and spatial navigation.  It is located near the center of the brain in the medial temporal lobe and is part of the limbic system, an area associated with memory, emotions and motivation. In a normal person, the hippocampus shrinks at about 1% per year.  In a patient with a damaged hippocampus, that atrophy may be 5% or greater per year.

Until recently, radiologists could only measure hippocampal atrophy by using the traditional approach by visually comparing MRI’s of a patient over time.  That changed with the introduction of  NeuroQuant.

NeuroQuant is a computer software program used to measure brain volume on an MRI in a clinical setting.  It was developed in 2007 and is approved by the U.S. Food and Drug Administration (FDA).   Several peer-reviewed studies have supported the reliability and validity of NeuroQuant for measuring brain volume above and beyond the evidence supplied to the FDA application.

NeuroQuant works by automatically segmenting and measuring volumes of hippocampus, ventricles and other brain structures and compares these volumes to a normal age-related healthy brain.  NeuroQuant can monitor changes in the atrophy over time to see how quickly the brain is shrinking, which can help measure the benefits of treatment modalities.

It has been compared with the radiologist’s traditional approach based on visual inspection and proven to be more sensitive and accurate in detecting brain atrophy than the traditional radiologist’s approach.  Ross, Ochs, Seabaugh, Shrader,  Man Versus Machine: Comparison of Radiologists’ Interpretations and NeuroQUant Volumetric Analyses of Brain MRIs in Patients with Traumatic Brain Injury, The Journal of Neuropsychiatry and Clinical Neurosciences 2013; 25:32-39. (Radiologist found atrophy in 10.0% of patients whereas NeuroQuant found atrophy in 50.0% of patients).In another study, it was demonstrated with NeuroQuant that progression of atrophy may continue for years after injury, even in patients with a mild TBI.  Increased atrophy predicts inability to return to work, which in many cases can be years after the  injury.  Ross, Ochs, Seabaugh, Demark, Shrader, Marwitz and Havranek, Progressive brain atrophy in patients with chronic neuropsychiatric symptoms after mild traumatic brain injury: A preliminary study, Brain Injury, November 2012; 26(12): 1500-1509.