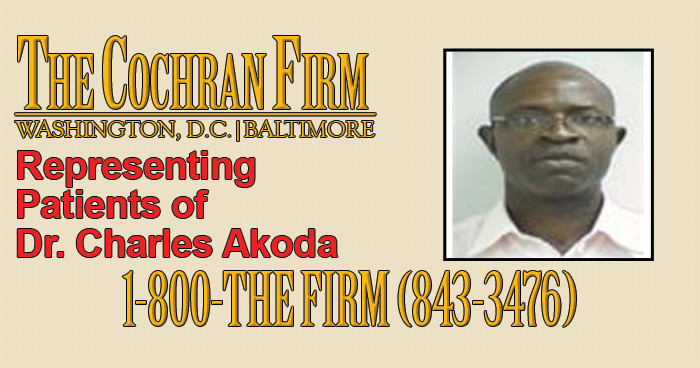 The Cochran Firm, D.C. is representing several former patients of Dr. Charles Akoda while the fake doctor practiced medicine as an OBGYN at Prince George’s Hospital Center and Dimensions Healthcare. Akoda, whose real name is Oluwafemi Charles Igberase, was recently sentenced to prison for using fake Social Security numbers to gain access to residency programs and fraudulently obtain a medical license in Maryland.

If you were a patient of Dr. Charles Akoda at PG Hospital Center in Cheverly, Maryland or at Dimensions Healthcare in Bowie, Maryland, you could be entitled to compensation. The Cochran Firm, D.C. offers free and confidential consultations to victims and since we represent clients on a contingency basis, we do not collect any fees until we win your case.

Staff is available 24/7 to answer your questions. You may also fill out an online contact form with the details of your case and we will contact you as soon as possible.

According to details released by the Department of Justice, Akoda entered the U.S. in 1991 on a non-immigrant visa and subsequently obtained three separate Social Security numbers in November 1991, January 1995, and September 1998. From 1992 and 1998, Akoda obtained three certifications from the Educational Commission for Foreign Medical Graduates (ECFMG) under different names, dates of birth and fraudulent social security numbers, in order to practice medicine and get into a residency program in the United States.

Certification by ECFMG is the standard for evaluating the qualifications of foreign doctors before they enter U.S. graduate medical education (GME) and begin a residency program to obtain a medical license. The ECFMG revoked two of Akoda’s certifications in 1995 but he was able to secure a third one in 1998 under his latest identify, Charles John Nosa Akoda.

Using the identity Charles Akoda, Igberase entered a residency program in New Jersey but was eventually exposed as a fraud and removed from the program. Somehow, Akoda was able to enter a residency program at Howard University Hospital in Washington, D.C. and eventually obtain a medical license to practice as an OBGYN in Maryland.

Helping victims get justice and compensation

Many victims of Dr. Charles Akoda are still in shock over the revelations he was able to obtain so many fake identities, be rejected from numerous accreditation programs, and still be able to obtain a medical license. The Cochran Firm, D.C. is determined to find out how and why PG Hospital Center allowed Akoda to work at its facilities without conducting some of the most basic checks on his background.

Contact one of our Washington DC personal injury lawyers to find out what your legal rights are and how you can hold Akoda and PG Hospital Center accountable for their negligence. Fill out an online contact form with the details of your case or call our office.