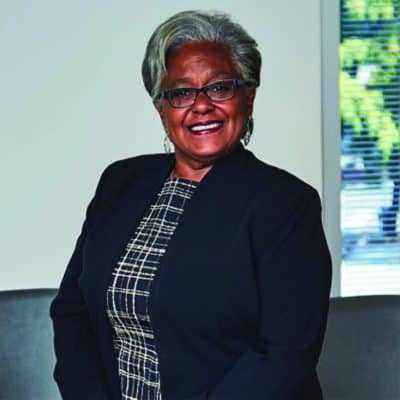 Sandra H. Robinson, an experienced trial attorney with The Cochran Firm, D.C., handles catastrophic medical malpractice and personal injury cases. She has settled or won at trial malpractice cases in the six- and seven-figure range; in a single year she won more than $20 million in jury awards on behalf of victims of malpractice.  Ms. Robinson has served as president of the Civil Justice Foundation and was the first African-American president of the Public Justice Foundation. She is a past member of the Board of Governors of the American Association for Justice (AAJ).  Ms. Robinson is past president of the Women’s Bar Association Foundation, and past president of the Trial Lawyers Association of Metropolitan Washington, D.C. She has held numerous other leadership positions including co-chair of the National Bar Association’s Trial Advocacy Section, Program Coordinator of the National Association of Black Women Attorneys and a Master in the Charlotte E. Ray American Inn of Court, which promotes the ethical and professional development of lawyers. Ms. Robinson has also served on the faculty of the National Institute for Trial Advocacy.  Ms. Robinson has received the American Association for Justice Women Trial Lawyers Caucus Annual Marie Lambert Award for leadership and mentoring of women lawyers. She has been honored as Trial Lawyer of the Year by the Trial Lawyers Association, D.C., and has also received the Presidential Award of the National Bar Association and the Charlotte E. Ray Award of the Greater Washington Area Chapter, Women’s Division of the NBA. This award is named in honor of the first African-American woman to practice law in the United States.

In 2003, Ms. Robinson was honored as a “Star of the Bar” by the Women’s Bar Association of the District of Columbia for her outstanding skills as a trial lawyer and her service to the community. She was also featured as a Distinguished Black Woman in the 23rd Annual Scholarship Calendar published by Black Women in Sisterhood for Action. She is a recipient of the Pursuit of Justice Award of the American Bar Association Tort and Insurance Practices Section, and of the Washington Bar Association’s Ollie May Cooper Award.  Ms. Robinson is a past Alumna of the Year of the Black Law Students Association of the Catholic University Columbus School of Law. She is listed in the Best Lawyers in America and as a Washington, D.C. Super Lawyer. She has been honored as one of the Top 50 Women Washington, D.C. Super Lawyers by Law & Politics Magazine.  Ms. Robinson is a member of the D.C. and Maryland Bars. She has coached moot court teams in the D.C. Street Law Program, mentored students interested in the practice of law, participated in annual Law Day programs in the public schools, and supported other public interest efforts. In addition, she has lectured at high schools, colleges, law schools, and medical schools on medicine and the law.  A native of Virginia, Ms. Robinson graduated from Oberlin College and received her law degree from the Catholic University Columbus School of Law.