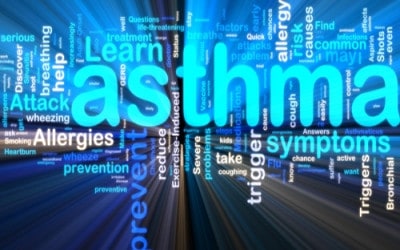 Asthma is a chronic inflammatory disease of the lungs that narrows airways and affects a person's ability to breath.  It works by causing the tubes that carry air into and out of your lungs (the airways) to become inflammed, swollen and sensitive.  When certain substances are breathed in, the muscles around the airways tighten.  This causes them to narrow which lessens the airflow into your lungs.  Cells in the airways may then make more mucus than norman which can further narrow the airways.

More than 22 million people in the United States are known to suffer from asthma.  6 million of these people are children.

Asthma symptoms include wheezing, coughing, chest tightness and shortness of breath.  The coughing often occurs at night or early in the morning.  Sometimes the symptoms are mild and go away with minimal treatment.  Other times, the symptoms can be severe enough to be classified as an asthma attack.  These symptoms may be triggered by a number of things including:

Sulfites in foods and drinks (like those found in wine);

Although there are treatments for Asthma, it is a long-term disease that cannot be cured.  Most people with Asthma can successfully manage their symptoms by following an Asthma Action Plan.  An Asthma Action Plan is a written plan of action created by your primary care physician which details what actions the patient should take to control asthma problems.  Generally, it is broken down into three zones:  Green Zone, Yellow Zone, and Red Zone.  Green Zone describes the plan of treatment when the patient is doing well.  Yellow Zone describes the plan when asthma is getting worse.  Red Zone describes the treatment plan when it is a medical alert. To determine what zone the patient is in at a particular time a peak flow meter is used. The peak flow meter is a plastic tube into which the patient blows as hard as they can.  A red indicator shows the force of the air blown from the lungs. It assists in monitoring the patient's maximum expiratory flow and provides and indicator of the condition of the patient's airways.

Recognizing early symptoms and treating them before they turn into a full blown asthma attack is part of that plan.  Most treatment of asthma symptoms focus on opening up the airways to allow more airflow into the lungs.  Medications such as albuterol are used in conjunction with a nebulizer and are inhaled in a mist form into the lungs.  Corticosteroids relieve airway inflammation and swelling and are the preferred medicines for long-term control.  Many of these corticosteroids are taken in an inhaled form from an inhaler.

Asthma may add to the risk of potential problems during and after a surgery. For instance, the intubation tube inserted for breathing during surgery may cause an asthma attack.  Make sure your surgeon is aware of your asthma and takes steps to lower your risks, such as giving asthma medications before and during surgery.