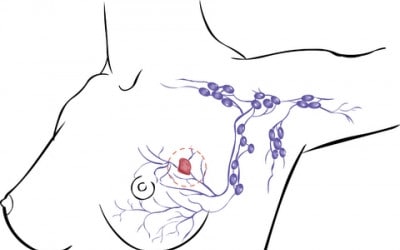 When a lump is found in a woman’s breast, and it is not a fluid-filled cyst, it usually requires removal, both for diagnosis to see whether or not it might be a cancer, and for treatment. Surgery to remove or biopsy breast lesions is relative simple, not usually associated with great pain, and almost always done as an out-patient procedure, often under local anesthesia.

If one can feel the lump, the surgery usually involves its complete removal (excisional biopsy). A relatively small incision is made, taking into consideration the location of the scar, not only for reasons of appearance, but also for potential future treatment. When a lump is quite large, and suspicious for cancer, only a small portion may be taken (incisional biopsy) to establish the diagnosis and provide information necessary to start treatment. As with other less invasive methods of the detection, such as fine needle aspiration or core needle biopsy, only a positive study is definitive; if negative, one must remove the lesion in total for complete biopsy.

When a lump cannot be felt, the surgeon has to turn to the radiologist for help in “localizing” the mass - in other words, pointing out where a lump too small to feel, yet one that might be an early cancer, is located. The most common method used is needle localization biopsy: using the mammogram as a guide, the radiologist inserts a special needle and then a wire into the lesion, and “marks the spot” for the surgeon, who subsequently traces the wire in the breast, finds the area in question, and removes it. It then is sent for evaluation by the pathologist, often with additional guidance from the radiologist as to where to look.

Other methods to evaluate mammogram-detected lesions include fine needle aspiration for cytologic analysis of the area in question, and the use of X-ray guided “stereotactic” biopsy devices. Two such instruments are commonly used – the mammotome, which takes a small core needle biopsy, and the Advance Breast Biopsy Instrument (ABBI), which often can totally remove a suspicious area. A more recent development, and still experimental method, is to identify the milk duct supplying the area, and then inserting a very fine catheter (tube) into that duct, introducing some sterile fluid to irrigate the duct, thus obtaining cells from the area to examine microscopically.

There are some uncertainties in the evaluation of breast lumps. First, not all pathologists will diagnose the same lesion identically. While there is some standardization, one must realize than no person can look at each and every cell in a breast biopsy, and there are honest differences of opinion. Recent advances in pathology allow the detection of cancer in minute microscopic quantities, diagnosing lesions we never knew of previously. It now is quite common to find cancers that have not yet gained the ability to metastasize (spread to other areas), or even lesions that have not yet changed sufficiently from normal to be called cancer. These early cancers, called carcinoma in-situ, need treatment, and often serve as a warning for the future development of cancer elsewhere in the same or the other breast. This allows true measures of prevention occasionally to be instituted.