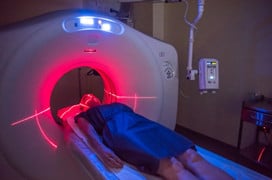 A CT or CAT scan is a type of X-Ray or imaging study also known as computed tomography or computerized axial tomography.  It combines a series of images taken from different angles and uses computer processing to create cross-sectional images of the bones, blood vessels, and soft tissues of the body.  It was developed by a British engineer named Sir Godfrey Hounsfield and Dr. Alan Cormack in the 70’s.  CT scanners first began to be installed in 1974.  It was estimated that over 72 million CT scans were performed in the United States in 2007.

A CT scan uses ionized radiation and is regarded as a moderate – to high – radiation diagnostic technique.  A CT scan may also be performed utilizing a contrast or dye agent to assist in viewing soft tissues.  CT scans are frequently used in emergency rooms because the scan takes fewer than 5 minutes and is typically less costly than an MRI.  A CT scan is best suited for viewing bone injuries, diagnosing lung and chest problems and detecting cancers.  A CT scan can detect differences between tissues that differ in physical density by less than 1%.

In traumatic brain injuries, CT scans are commonly used to detect physical damage in the brain and are considered superior in detecting acute subarachnoid or acute parenchymal hemorrhage, hematomas, and swelling.   Thus, in the first 24 hours after the injury, a CT scan is the initial imaging modality of choice.

Conventional CT does have its limitations. Ct scans are susceptible to a number of artifacts such a streak artifact, partial volume effect, and motion artifacts.  CT can also miss small amounts of blood that occupy widths less than a slice because of volume averaging.  CT findings may also lag behind actual intracranial damage, so that examinations performed within 3 hours of trauma may underestimate injury.  CT scans also often appear normal in patients with a mild TBI.