Causation in a Personal Injury Action 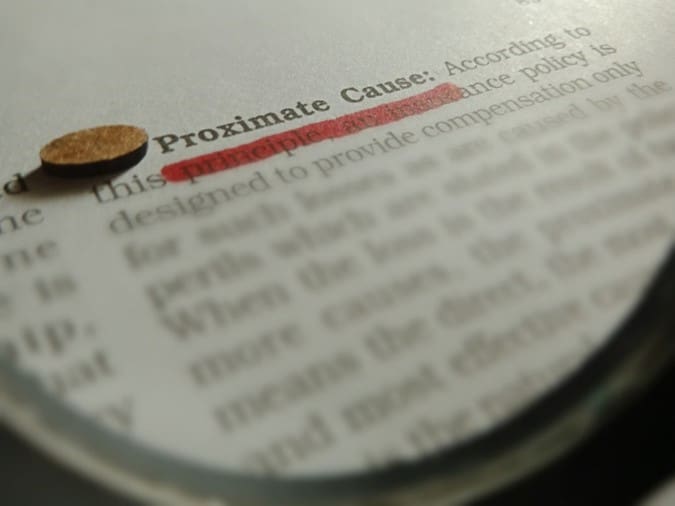 To be successful in a personal injury lawsuit the plaintiff, or person bringing the action must prove the following three elements of the case:  Liability, causation and damages.  Liability is discussed in another article in this section.  But generally, liability is proving that the defendant was negligent or breached a duty owed to the plaintiff.

From a legal standpoint, causation can be broken down into two separate and distinct concepts:  cause in fact and proximate cause.  In order to successfully prove causation in a personal injury lawsuit, the plaintiff must prove that the defendant’s negligence was the proximate or legal cause of their injuries and damages.

There are always many causes when a person suffers a personal injury.  Cause in fact is established using the “but-for” test.  This test determines whether the negligence would have occurred “but for” the actions or omissions of the defendant.  For instance, in a case where the plaintiff was injured in a car accident when the defendant ran a stop sign and hit them, one cause in fact of that accident would be the plaintiff’s decision to drive to work that morning.   But for the plaintiff deciding to drive to work instead of taking the bus, the accident would not have happened.  Thus, driving to work is a cause in fact of the accident.  There can be many causes in fact in personal injury matters.

Sometimes, the law will provide a presumption in favor of causation in a personal injury matter.  For instance, in Louisiana, the Louisiana Supreme Court has stated:

Therefore, under Louisiana law, as long as medical evidence demonstrates a “reasonable possibility” of a connection between an accident and a medical condition, there will be a presumption that the accident caused the condition if the symptoms allegedly begin with the accident.

Causation is not always as straight forward in a personal injury matter.  A plaintiff’s Injuries or illness can occur in situations that were not caused by the defendant’s proven negligence in a case.  In medical malpractice cases it may be established that a physician was negligent in injuring the patient during  surgery, but the patient later died from a cause unrelated to the surgeon’s negligence.

And, there may be causes known as superceding or intervening causes that occur after the defendant committed negligence that were caused by another person.  For instance, if a defendant negligently hits a vehicle from behind in a rear-end collision which causes injuries to the plaintiff for which an ambulance is called, that defendant is not liable if the plaintiff dies on the way to the hospital because the ambulance in which he was travelling was struck by an airplane that crashes.  In this example the crashing airplane is a superceding/intervening cause of the plaintiff’s death.

Comparative fault is another concept that applies to most personal injury matters.  Comparative fault applies when there may be more than one person, including the plaintiff, at fault for causing injuries to the plaintiff.  For example, if a plaintiff slips and falls on a defective staircase and gets injured, that plaintiff may be partially at fault for the cause of his own injuries if he knew about the defective stairs and forgot to watch where he was going.