What are Some Causes of Accidents with Large Trucks? 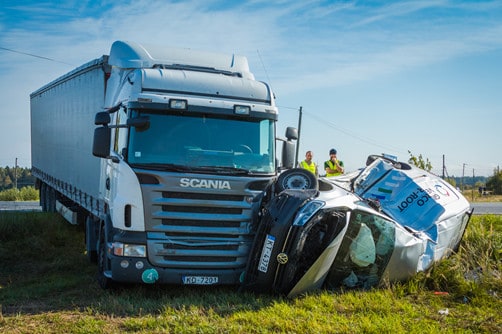 Since our interstates are filled with trucks moving in commerce to deliver all of the important commodities we use daily, it is important that we learn how to coexist safely on our nation’s highways with these potentially deadly large trucks.

As a starting point it should be noted that the average large truck travelling on our interstate highways weighs over 80,000 pounds.  Simple physics tells us that a force moving at that speed can cause a lot of damage to passenger vehicles.  Other factors that can lead to crashes include:

·         Truck Tires – Truck tires often contribute to crashes when they get worn or blow out while travelling.  The front “Steer Tires” are particularly problematic when they become worn

·         Truck Mirrors – Even though trucks have large mirrors, there are many blind spots In which a truck driver cannot see all around his vehicle.  These blind spots are referred to as truck “No Zones” and lead to a third of all truck crashes

·         Truck Rollovers – Trucks have a high center of gravity.  Thus, there are particularly vunerable to rolling over when they get off balance.  This can be caused by accidents, road embankments and high winds.

·         Trucks Catching Fire – Trucks carry huge fuel tanks and often transport dangerous or hazardous materials.  This can lead to huge fires if an accident occurs.·         Truck Jack-Knives – Ice, or other slippery roadways can cause the back of the trailer to slide past the cab of the trailer leading to a “Jack Knife”.  This can be dangerous to passenger vehicles.