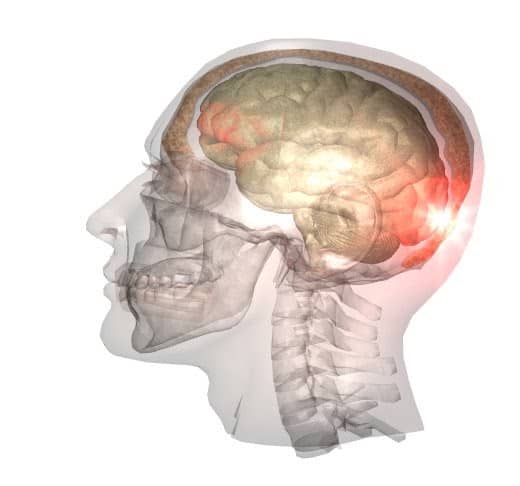 Coup-Contra Coup are terms used to describe two brain injuries occurring from one trauma to the head.  The coup injury occurs at the site of impact with an object, while the contra-coup occurs at the site directly opposite from the area of the trauma.  Figure 1 shows one type of coup injury that occurs when the head strikes a fixed object at the front of the head.  Figure 2 shows the contra-coup injury that occurs when the force of the head striking a fixed object in the front causes the brain to be slammed back against the back of the skull in the opposite direction from the frontal impact of the coup injury.  In these diagrams, the victim has suffered injury both to the frontal lobe of the brain and the back lobe of the brain from a single impact.

The brain, often described like jello, sits in cerebrospinal fluid within the skull.  When a force is applied to the body causing the head to move in one direction, the brain inside the skull also moves in that same direction.  When the head abruptly decelerates, as when it strikes a fixed object, the brain collides with the inside of the skull causing the coup injury.  The force of that initial collision sends the cerebrospinal fluid rushing toward that injury which then forces the brain in the opposite direction toward the opposite end of the skull causing the brain to collide with the opposite side of the skull, the contra-coup injury. Coup-Contra-Coup injuries are not limited to front and back impact injuries.  They can occur from side to side or even diagonally on opposite sides of the brain.

Coup-Contra Coup traumatic brain injuries are considered focal brain injuries, or brain injuries that occur in a particular spot in the brain usually causing what is known as a focal lesion.  Focal injuries typically have symptoms that are related to the damaged area of the brain.

Coup-Contra Coup traumatic brain injuries are often seen when direct mechanical forces are applied to the head, such as in a car accident when the head hits the windshield or the frame of the door or window.  They can also be seen with blows to the head by objects or when a person slips and falls and hits the back of their head.  However, Coup-Contra Coup injuries have been observed in victims with acceleration or deceleration when no impact with a fixed object occurs.  In this instance, the brain is thought to bounce off the inside of the skull and hit the opposite side as the rapid acceleration or deceleration occurs.

Contra coup injuries are particularly common in the lower part of the frontal lobes as they are usually inflicted by a fall from a standing position striking the back of the head on a paved surface.