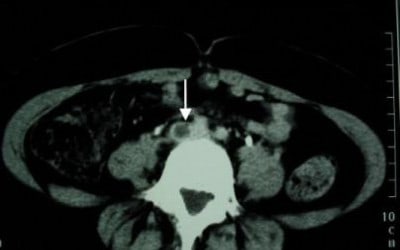 SUMMARY: Deep Vein Thrombi (clots)  occur when blood slows down, encounters obstructions, or is in hypercoagulable state. This generally occurs in the deep veins of the legs or the solar plexus blood vessels and occasionally in the deep vessels of the upper extremities. Within 5-10 days the clot adheres to the vein wall. Before that it may propagate up the vein or a piece may break off and travel to the lung, causing a Pulmonary Emboli, resulting in consequences, varying from the absence of symptoms to death from hypoxia and shock. The local sequelae consists of venous varicosities, edema, stasis dermatitis, stasis ulcers, and even amputation, depending on the size and location of the clot.

Diagnosis of Deep Vein Thrombosis (DVT) is not always obvious, but if 3 or more risk factors are present along with certain physical findings, it’s presence is highly likely. Confirmation of the diagnosis is bolstered by Ultrasound/Doppler, MRI, Contrast Venography, etc. Treatment consists of thrombolysis, anticoagulation, bed rest, elevation of the extremity, heat, etc.

Prevention is the best approach and consists of basic common sense knowledge such as, not sitting in one position for prolonged periods, wearing support hose, elevating the legs, etc. Pieces of DVT, called emboli, are trapped in the lung because of the small vessels in that region. If too large an area is blocked off, then oxygen cannot reach the blood stream and the brain is deprived of oxygen. The patient may experience chest pain, shortness of breath, or coughing up blood and tests will substantiate the diminution of oxygen in the blood. Special lung scans are used to confirm the emboli’s presence. Fibrinolytics, anticoagulants, and even surgery may be necessary, if a large portion of the lung’s vasculature is obstructed. A filter may be placed in the Inferior Vena Cava to prevent further emboli from traveling from DVTs in the legs to the lungs.

Blood has an inherent tendency to clot. This is especially expressed whenever it slows down,  encounters rough surfaces, or is in a hypercoagulable state. This is referred to as Virchow’s Triad. These conditions exist in many circumstances, varying from trauma to the venous wall to prolonged sitting to clotting disorders. This is especially likely to occur in the deep veins in the extremities and in the solar plexus vessels and is noteworthy for 2 reasons: Local inflammation and Pulmonary Emboli.

Once a clot (thrombus) forms, it takes from 5 to 10 days to organize and adhere to the lining of the vein wall. Before that, it  frequently dissolves, spontaneously, but it some cases, it may propagate proximally, extending into other veins, or a piece (embolus) may break off and travel to the heart and, subsequently, be trapped in the lung (Pulmonary Emboli).

After the Deep Vein clot  organizes and adheres to the vein wall, it may slowly undergo recanalization, whereby the center of the clot breaks down and blood can once again traverse this area through the new channel. More frequently, inflammatory changes occur in the venous wall and signs and symptoms develop suggesting inflammation and peripheral obstruction to blood flow develops, such as swelling, warmth, redness and pain.

Depending on the extent of the DVT will depend the extent of the signs and symptoms. If the thrombus is not dissolved by treatment, often it will disrupt the valves in the deep vein or completely occlude the venous lumen, retarding the blood return through that vein and forcing that blood to return to the heart by the remaining deep veins. This added volume causes the other veins to dilate, often disrupting their valvular integrity, resulting in varicosities, edema, skin breakdown, ulcers and even gangreen.

Diagnosis: The presence of 3 or more of the above risk factors is very helpful in suggesting the propensity for DVT to develop. Along with this are the signs and symptoms, while not being specific, are very helpful. Signs & symptoms: Swelling, Pain, Tenderness, Warmth, unilateral edema, prominent superficial veins, diminished emptying of peripheral veins when the extremity is elevated to and above the heart level. Sometimes a cord is palpable, especially when superficial thrombophlebitis is associated. Fever may be present. Pain in the calf with straight knee and dorsiflexion of foot (Homans Sign) is suggestive, but not specific.

Radiology : 1.) The gold standard for diagnosis of DVT is a venous angiogram, but this is tedious and expensive, and often a test of last resort. 2.) The Duplex Ultrasound study, utilizing Ultrasound and Doppler modalities, measuring the blood flow by compressing the deep vein is 98% specific and sensitive. 3.) Impedence Pletysmography, which measures the blood volume in relationship to venous outflow is used by many Physicians, but is not as sensitive as the Duplex U/S study. 4.) MRI- is an expensive, but very helpful study and is often used in confusing situations.

The most difficult DVT to detect is when the thrombus is either non-occluding, or proximal to the inguinal ligament or in the calf. Sometimes a repeat evaluation and study is necessary when the first test is equivocal.

Treatment: Thromboysis- if instituted early, these drugs, such as   may dissolve the clot entirely. Anticoagulants- started early to prevent the DVT from propagating, proximally, up the vein and to prevent other clots from forming.

Elevation and Support Hose to encourage the blood to flow faster in it’s return to the heart. Heat to encourage rapid inflammatory resolution and adherence of the clot to the vein wall.

Prevention: This is most important. Sitting or standing for too long stagnates the blood. Crossing the legs, or letting them hang down for long periods slows the blood. Obesity and edema in the lower extremities from other causes places a burden on the deep veins. Failure to elevate the legs after trauma, which distorts the blood flow through damaged veins is causational. Prolonged bed rest without elevation, active and passive exercises of the extremities is a risk. Failure to use Compression Stockings post-operatively or post-partum is risky.  Tight elastic top stockings will slow the blood down.

PULMONARY EMBOLI When an Embolus from a deep vein thrombosis reaches the lung, after traversing the right side of the heart, it is trapped in the small arterioles in the lung and is referred to as a Pulmonary Embolus (PE). This is fortuitous, because, although it causes havoc in the lung, it is precluded from reaching the left side of the heart, from where it can be extruded into the general arterial circulation, where it may end up in the brain, resulting in a stroke, or other organ of significance. The lung is a large resilient organ, and can take the embolic abuse better than most other organs.

Even emboli can be extruded from the deep veins of the upper extremities, where thrombi may occur in the Axillary or Subclavian veins, which have been subjected to indwelling catheters. When the embolus blocks up a small arteriole or even a large pulmonary artery, the oxygen within the air sacs (alveoli), is unable to pass through the lung/blood vessel membrane to reach the blood where it is normally carried to the rest of the body. This results in that area affected by the embolic process in being unable to perform the normal oxygen transfer function and if it’s a large enough area, symptoms of oxygen deprivation will occur. The individual will become Short of Breath. Often pleurisy chest pain will occur (pain on inspiration). Wheezing, chest wall tenderness without prior trauma, new onset arrhythmia, such as atrial fibrillation, and even unexplained shock can occur. Often the symptoms are vague. A friction rub may be detected on physical examination. Chronic recurrent PE, often associated with vague symptoms or asymptomatic, can result in permanent chronic damage to the heart and lung.

Diagnosis: The signs and symptoms are as aforementioned. Shortness of Breath and Chest Pain are the most common presenting symptoms. Sometimes extreme anxiety and fear of imminent death is expressed. The patient is often pale. The pulse may be fast in an effort to move oxygen containing blood around faster. Laboratory studies reveal a fall in the partial pressure of oxygen in the blood (PO2). A routine chest X-ray may show absence of lung marking in a section of the picture, because there is no blood flow through the vessels in that region of the lung. A Ventilation-Perfusion Lung Scan is the non -invasive gold standard test for suggesting the presence of a Pulmonary Embolus. It’s referred to as a VQ scan and is reported as high probability, intermittent probability, and low probability of a PE. Of course, Pulmonary Arterial Angiography is the definitive diagnostic tool to confirm the presence of a PE. Recently a high-resolution helical Computed Tomographic Angiography has shown excellent consistency in predicting PE’s presence.

Treatment: As with DVT, , anticoagulants, fibrinolytics, and surgery, are the treatments directed at dissolving the clot, preventing propagation of the clot, preventing new clots from breaking off from the DVT and reaching the lung, and in extremely large Pulmonary Emboli, removing the clot (embolism), which is blocking a major Pulomnary Artery. A Greenfield filter placed in the Inferior Vena Cava is instrumental in preventing further emboli from reaching the lung and can be placed non-invasively.