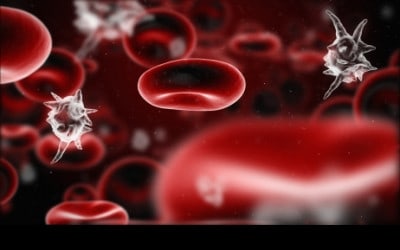 Imagine yourself as a physician, having a patient who is quite ill from an overwhelming infection or major trauma or cancer, or even a premature separation of the placenta in pregnancy, and the patient suddenly shows signs of multiple Blood Clots developing in many different areas of the body. They may manifest as reddened indurated areas in the surface of the skin, or even small areas of cyanosis, as in the fingers. Sometimes, small areas of necrosis (gangrene) are evident. These are areas, which do not receive enough blood, because the clots block off the circulation.

This is often referred to as “Ischemia”. Numerous bruises may become evident. And just as you are deciding to place your patient on blood thinners (Anticoagulants), designed to combat this excessive clotting tendency, the patient starts to bleed everywhere. This bleeding may occur from as many as three different areas of the body, such as by having nosebleeds, urinary bleeding and hemorrhages in the gums or into the skin. So now you’re really up against it. What causes this phenomenon be where the patient clots excessively and then bleeds excessively, and often, both at once?

Many Physicians now encounter a condition where most of the clotting factors in the blood stream are being used up because numerous clots are occurring within the blood vessels in many of the organs. The organs involved, unfortunately, are often vital, for life, such as the lungs, kidneys, liver and brain. And then, to complicate matters, when most of the clotting factors necessary to cause clotting are used up, bleeding develops. This phenomenon is called Disseminated Intravascular Coagulation (DIC). The balance between the clotting (thrombosis) and the bleeding tendency determines the constellation of symptoms.

As you can see, it occurs in very sick patients and often results in death. It is incumbent for the physician to anticipate, recognize and promptly treat this condition when it occurs, or death will, surely ensue. As DIC progresses, the patient may experience a fall in blood pressure, onset of elevated temperature, and shortness of breath. Since less blood is reaching the brain, the patient’s sensorium may deteriorate, manifested by somnolence, confusion and even coma. Or the patient may become restless and agitated from diminished oxygen to the brain. Jaundice, secondary to breakdown of clots may manifest itself. Shock is often the final episode, resulting in death.

Fortunately, there are clues which the physician must recognize. As expected, since the clotting system is involved, these clues present as abnormal values revealed by the blood tests. The signs and symptoms may be varied and complex and the diagnosis is not often detected until hemorrhage ensues. So the laboratory values are paramount in pointing to the proper diagnosis.

A fall in the platelet count, suggesting that the platelets are being used up to form the multiple clots is one of the first and most striking, obvious findings. The fibrinogen level is diminished, since that also, is used up in the clotting frenzy. The CBC will show a rapidly developing anemia, as the clotting and bleeding process is progressing. Once DIC is suspected, other blood tests are helpful in confirming it’s presence. A D-dimer and Fibrin Degenerative Product confirm the fact that clots are being formed and destroyed, as bleeding occurs. Fragmented red blood cells, called Schistocytes may be observed on the blood slide.

Pathophysiology: Some initiation of coagulation is necessary to trigger off this chain reaction. In these sick patients, injury of the lining of the blood vessels or injury of the tissue initiates this reaction. The vessel lining, in an effort to repair this injury, by its usual mechanism, releases substances which promoters clotting. The clotting is the body’s first approach to healing of that disrupted lining. Then, the other processes of healing go into action. This material, which previously was not in contact with the blood, before the vessel lining was disrupted, now interacts with the blood clotting mechanisms and the cascade of clotting goes forward. Unfortunately, in DIC, so much of these clot-promoting substances are released that a clotting frenzy ensues. Although bleeding may be the most prominent recognizable symptom, it’s the small clots in the microcirculation that jeopardizes the vital organs and results in organ failure, which is irreversible.

TREATMENT: The treatment of DIC must be begun early and aggressively.

1.) The most important thing to treat is the underlying stimulus. Sepsis must be treated with aggressive antibiotic therapy. The retained placenta must be evacuated. The trauma must be addressed and treated;

2.) To prevent shock, bleeding must be addressed by replacement of fluid. This helps by elevating the blood pressure and clearing the blood of Fibrin Degenerative Products, which continue the cascade of clotting and bleeding;

3.) Oxygen to keep the blood oxygenated and to try and deliver more oxygen to the tissues deprived of blood flow by the clots;

4.) Treat the clotting with Anticoagulants;

5.) Replace the lost clotting components, so the bleeding will stop;

6.) If all else fails, Antifibrinolytic agents may be of help, especially if a hyperfibrinolysis state exists, as in some forms of Leukemia and Cancer. Such a drug is Amicar or Cykokapron, as an alternative.

SUMMARY: Disseminated Intravascular Coagulation is a continuum of events that occurs in the coagulation pathway, associated with severe illnesses or trauma. It is accompanied by physical findings suggesting small vessel clotting and laboratory findings of a decreased or falling platelet counts. Other findings of enhanced clotting activity is evidenced by utilization of numerous blood clotting factors such as Fibrinogen. Bleeding occurs when these clotting factors are used up and occurs in multiple areas of the body. Both the clotting and the bleeding may occur simultaneously. The patient may go into shock from blood loss or become confused by poor oxygen transportation. The prognosis is guarded and often related to the underlying stimulus and its severity, such as Sepsis or Trauma.

The physician must anticipate and think of this condition and move swiftly to verify its presence with laboratory confirmation, and treat the underlying etiology, as well as monitor the thromboembolic and bleeding complications which occur.

Although there is no specific laboratory test for DIC, looking for a fall in the platelet count, the presence of FDP/D-dimer, and a prolonged PT and a PTT are considered indicative of its presence. Treatment is directed towards the underlying etiology, replacement of blood products, and the utilization of anticoagulants and, if necessary, the addition of fibrinolytics.