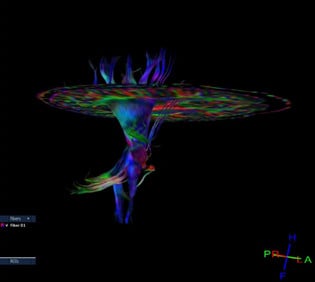 Diffusion Tensor Imaging or “DTI” is an MRI technique that enables the measurement of the restricted diffusion of water in tissue.  It was first introduced to the field of MR by Peter Basser in 1994.  It allows the mapping of water molecules in the brain and can be used to reconstruct the three dimensional white matter fiber tracts in the brain.  DTI is particularly effective in the evaluation of the white matter of the central nervous system microstructure considered the most important region of abnormality in a Traumatic Brain Injury.

DTI has the ability to qualitatively and quantitatively demonstrate pathology that is not detected by other modalities such as CAT Scan and routine MRI.  In other words, DTI has detected brain injury which a CT or normal MRI did not show.  There is a consensus in the medical literature that DTI effectively differentiates patients with TBI from patients without it.