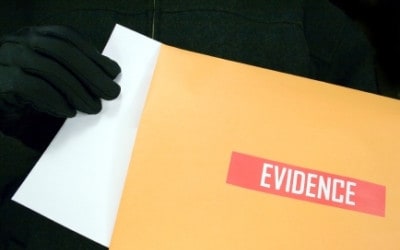 Evidence is defined as any species of proof, or probative matter, legally presented at the trial of an issue, by the parties involved in the matter. Evidence may be presented by witnesses in the form of testimony, or by documents, exhibits, concrete objects, photographs etc. Evidence is presented in order to induce a belief in the minds of the judge or jury as to the contentions of the parties. It is testimony, writings, material objects or other things presented to the senses that are offered to prove or disprove the existence or non-existence of a fact.

In a legal context, like a personal injury case, the rules of evidence are used to determine whether certain testimony, writings, documents or objects are proper to admit before the judge or jury. The Rules of Evidence are used by your lawyer to try and admit or exclude evidence from your trial or hearing.

The Rules of Evidence are uniform in the federal court system and are governed by the Federal Rules of Evidence. In cases pending in the various state courts each state may have its own rules of evidence. State court evidentiary rules are not uniform and it is not unusual for there to be variations among the states. Your lawyer should be familiar with the local evidentiary rules in the state in which your case is pending.

Part of preparing your case for trial involves ensuring that you have enough evidence to prove what is necessary to win your case. Personal injury attorneys spend considerable time gathering and organizing information, then evaluating that information to determine whether it is important for your case. When you are handling a personal injury case some of the evidence your lawyer will need includes: medical records to establish the nature and extent of your injury, wage loss documentation to verify any lost income and any information to help establish who was at fault in the accident. It will save considerable time if you can obtain as much of the above information as possible before meeting with your attorney. The faster the attorney has the necessary evidence, the sooner he will be in a position to evaluate your case.