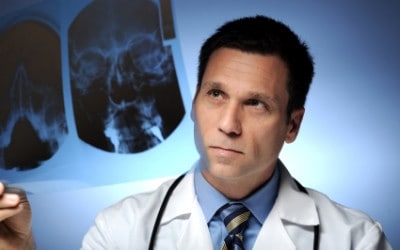 It is not uncommon for x-rays, Cat scans and MRI's to be misinterpreted. Often this occurs in the emergency room setting. One of the primary reasons for this problem stems from the policy adopted by most hospitals.

This policy allows the treating emergency room physician to order x-rays or other diagnostic studies which are performed and then interpreted by him. The patient is allowed to be discharged (if the films are interpreted as negative). Later that day or the next day, a radiologist will then reinterpret those x-rays. This is called overreading the x-rays.

If the radiologist disagrees with the interpretation of the emergency room physician, then the patient is supposed to be notified and told to come back to the hospital. The problem is that by that time, the hospital may not be able to find the patient, or the problem has substantially worsened.

If the original part looks o.k., but the other part is problematic, the physician may miss it because he was not focusing on that part, but rather on the part he reviewed carefully. The standard of care requires that all structures or body parts which can be seen on the x-ray should be considered by the physician interpreting the film.

Another potential mistake involving x-rays involves performing needle guided biopsies. These biopsies are usually performed in conjunction with a Cat Scan to make sure the needle goes into the suspicious mass. If the needle is not properly placed in the mass, the biopsy can render a false negative when in fact cancer is present.