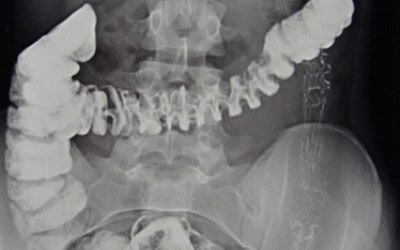 55 year woman admitted to hospital for ERCP. By history she was complaining of right upper quadrant abdominal pain and epigastric pain. She underwent a two hour procedure during which the GI physician performed a sphincterotomy and a bile duct sweep. His findings were consistent with a benign papillary stenosis with sludge.

The patient remained in the recovery room for two and a half hours. She had several episodes of hypertension. She also developed an acute onset of right lower quadrant abdominal pain. She was transferred to the floor and given substantial doses of Dilaudid.

About an hour after being transferred, she underwent an ultrasonic examination of the supine abdomen to rule out free air (perforation). That ultrasound revealed the presence of a crescent shaped gas collection. A progress note also stated that the abdomen was distended and tender. The GI physician’s impression was a retroperitoneal perforation.   However, he decided to manage it medically instead of surgical intervention/repair.

The patient endured a difficult night of pain. By the next morning an upper GI series and CT scan were finally performed which confirmed a rupture of the duodenum. The patient was taken to surgery where a large amount of retroperitoneal soilage and free succus were found. The patient continued to deteriorate and underwent several more surgeries to remove necrotic tissue.

The patient expired a few days later and the autopsy confirmed that her death was caused by necrotic small bowel and other problems associated with the perforation of the duodenum.

year old man arrives to emergency room at 2:50 a.m. by ambulance with a chief complaint of vomiting coffee ground emesis and black tarry stools. Earlier in the evening he threw up a large amount of blood.  The patient was pale and passed out when he sat up for an x-ray.  BP 104/52.  Presumed diagnosis of UGI.  Patient has a BUN of 104 and a creatine of 1.8. Hemoglobin of 6.4

A GI physician is consulted at 9:00 a.m. who decides to "stabilize the patient with fluid and blood recusitation" for the remainder of the day and put off endoscopy until the next day (more than 24 hours after arrival to the e.r.). Endoscopy performed the next day and a red spot is cauterized.  Nasal aspiration never performed.  Patient aspirates on blood and dies.