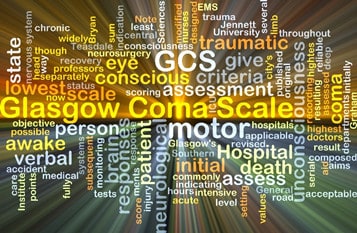 The Glascow Coma Scale (“GCS”)- is a neurological scoring system used to describe the level of consciousness in a person following a traumatic brain injury.  It was first published in 1972 by Graham Teasdale and Bryan Jennett, both professors of neurosurgery at the University of Glasgow. It was originally designed to assess the level of consciousness of head injured patients once admitted and stable.  However, the GCS has since been adapted for use as a pre-hospital triage tool.

A patient is assessed using three main criteria, eye response (E), verbal response (V), and motor response (m).  Each criteria has up to 6 different possible responses.  Each response is assigned a predetermined point value.   The examiner chooses only  one response from each of the three categories depending on how the patient responds.  The  sum of the categories forms a score ranging between  3 and 15 with 15 representing the highest level of consciousness.