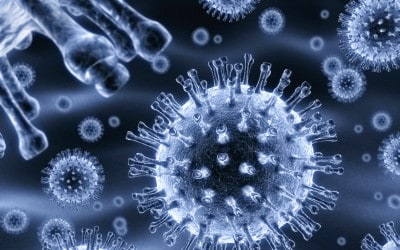 A 45 year old man who suffered a puncture wound to his thigh from a screw went to the emergency room with a very red and puffy wound several days later.  He presented to the emergency room with a very altered mental state from an obvious ongoing infection.  Despite his condition, the E.R. physician delayed administering a broad spectrum antibiotic pending testing and receipt of results.  The man received the first antibiotics four hours after his admit to the E.R.   The E.R. physician eventually consulted infectious diseases who examined the wound and noted a purplish discoloration vs. early necrosis.  The infectious disease doctor then left the hospital and returned 6 hours later.  By then, the would was so bad, immediate surgical debridement was undertaken.    It was determined that the man was suffering from necrotizing faciitis, the flesh eating bacteria than can take an inch of skin an hour.  He also had tetanus.  The emergency room physician had administered a tetanus shot in the E.R., but that would only work in about ten days.  He failed to administer the Tetanus Immune Globulin which could have saved the man from losing his legs. He ultimately developed tetany and had to undergo a bilateral amputation.  Case Settled for $2.6 million dollars (Louisiana Cap of $500,000)

A navy enlisted man went to a private emergency room following an injury to his head when he stood up suddenly and the corner of a cabinet penetrated his scalp.  He presented with signs of blurred vision, severe headaches, insomnia and changes in his mental state.  He was discharged from the E.R. without undergoing a CT scan.  Two weeks later, he returned to the same E.R. and was seen by a different emergency room doctor.  His symptoms had persisted for weeks and he was getting progressively worse.  Again, he was discharged without undergoing testing.  Within a day, the man collapsed and was taken to a different hospital where he was diagnosed with a subdural empyema.  He underwent 18 brain surgeries over the next few years.  Suffers from severe aphasia and needs permanent care.  Case settled for $2,060,000 (Louisiana Cap of $500,000)

Man Undergoes Below The Knee Amputation From Osteomyelitis

A 50 year old man sustains a tibia/fibula fracture when he steps into a hole.  This requires the implantation of metal plates and screws to fix the fracture.  During the course of his recovery, he gets an infection at the site of one of the screws.  The orthopedic surgeon does not culture the material from the wound and places the man on oral antibiotics.

A skin flap is placed by a plastic surgeon because there is not enough skin coverage to heal the wound.  The plastic surgeon notices infection and tells the orthopedic doctor.  Again oral antibiotics are given without culturing wound.  Ultimately a bone scan confirms osteomyelitis infection of his bone.  However, the infection has advanced to the point where even sustained I.V. antibiotic treatment does not clear the infection.   Man undergoes below the knee amputation.