Are Large Trucks Regulated by the Federal Government 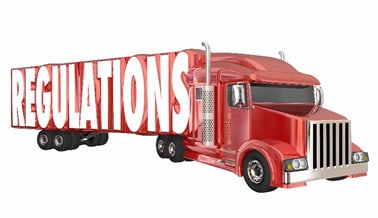 Yes, The Federal Motor Carrier Safety Administration (FMCSA) issues regulations which govern the safety and oversight of commercial motor vehicles.  Its mission is to reduce crashes, injuries and fatalities involving large trucks and buses.  The FMCSA was established as a separate administration within the U.S. Department of Transportation on January 1, 2000, pursuant to the Motor Carrier Safety and Improvement Act of 1999.  It is headquartered in Washington D.C. and employs more than 1,000 people in all 50 states.

Some of the rules issued by the FMCSA regulate the hours that commercial truck drivers can operate their vehicles in a 24-hour period.  These rules were designed to increase safety and decrease accidents related to truck driver fatigue.  Other rules govern the inspection, repair and maintenance of commercial vehicles and the transportation and parking rules for hazardous materials.

The FMCSA also regulates the driving credentials of commercial motor carriers to help ensure that the safest and most qualified drivers are operating large trucks.  The rules apply to every person who operates a commercial motor vehicle in interstate, foreign, or intrastate commerce, to all employers of such persons, and to all States.  Some of these regulations include:

There are exceptions for certain military drivers and for farmers, firefighters and emergency response vehicle drivers and drivers removing snow and ice.