Do Large Trucks Roll Over More Easily Than Cars? 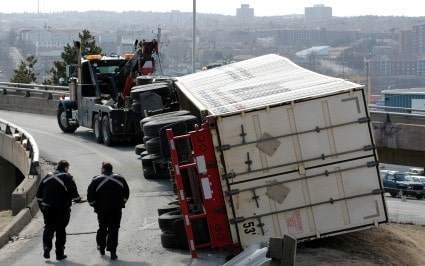 The answer is a resounding YES THEY DO.  And this can be the cause of catastrophic accidents.  It is estimated that approximately 9% of all large truck crashes involve rollovers.  Projected nationally, that means approximately 13,000 truck rollover accidents occur each year.

Moreover, national studies have found that rollovers are the deadliest crashes, occurring with particular frequency on freeway ramps and inclines.  Knowing the crash causes that are specific to rollovers will allow countermeasures to be directed specifically to their reduction.

There are many reasons that trucks roll over so easily.  First, because of their design, trucks have a higher center of gravity than a passenger car.  In other words, they are top heavy.  Second, trucks, especially those loaded to the 80,000 pound limit on U.S. Highways, have more weight that will not be evenly distributed which makes them easier to tip over.

When a truck travels along a curved path, the centrifugal force causes it to lean away from the direction of the curve.  The result can be a rollover in which the truck overturns.  The vast majority of rollover causes were driver errors.  These included:

Speed is the biggest contributor to rollover crashes, making up approximately 45% of all rollover crashes.  Two aspects of the conditions under which truck crashes occur help explain the role of speed.

First, rollovers occur when the front wheels are turning the truck more quickly than the cargo it is carrying; the faster the speed of the vehicle, the greater the difference. Second, large trucks operate chiefly on Interstates and other high speed roadways.

As with speed related incidents in general, it is not the very high speeds associated with “reckless” driving but rather speed that exceeds what is safe for the particular combination of vehicle and road characteristics.

When traveling close to large trucks, be mindful of these rollover facts.  They could save your life.