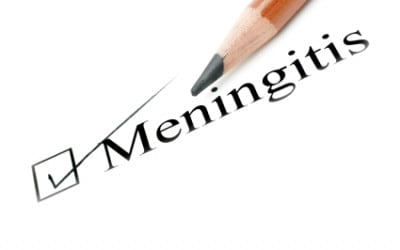 Meningitis in children or adults is characterized by a severe headache, with vomiting or nausea, and a stiff neck in which the person is unable to touch the chin to the chest. Further symptoms include a rash, confusion, difficulty concentrating, sleepiness, and sensitivity to light. Symptoms may develop over several days, or may develop in as little as 24 hours.

People who live in group settings, such as dormitories or military barracks, are at much greater risk of developing meningitis. Also, those with compromised immune systems are more susceptible to developing the disease. For these individuals, immunization is highly recommended.

The treatment for meningitis depends on the organism causing the disease. Diagnosis is generally made through a lumbar puncture, in which a small amount of the fluid surrounding the meninges is removed by the insertion of a needle into the spinal column. If the meningitis is caused by a virus, antibiotics are ineffective. Treatment of viral meningitis generally includes bed rest, lots of fluids and over the counter anti-inflammatory pain medications.