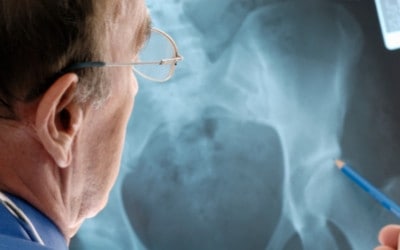 SUMMARY: Osteoporosis is very common, especially in postmenopausal females and in the elderly of both sexes. It is asymptomatic in it’s early stages and when symptomatic, as with the development of bone fractures, it is well advanced. Poor lifestyles, such as inactivity, poor nutrition, little sunlight exposure and smoking may potentiate the genetically predisposed (white and Asian females) to this malady. Testing for those at risk is helpful and principally revolves around measuring and monitoring bone mass density (BMD). Treatment mandates changes in lifestyle and the recent addition of medication has dramatically lessened the prevalence of low trauma fractures.

Osteoporosis has reached epidemic proportions in the United States, affecting approximately 25 million people, principally women. By age 70, more than 30% of women have osteoporosis. But it is rare in blacks. The white and Asian population have the higher incidence.

Bone mass density usually peaks between the ages 25 and 35. It begins to decline after the age of 35, and in women, this decline is accelerated during the postmenopausal years. The bone mass may decline, in women after menopause, by as much as 3 to 7 percent per year for up to 7 years. Then the bone loss slows up to 1 to 2 percent a year as it does with men. The epidemiology of fractures follows similar trends as the loss of bone density. Fractures of the distal radius increase in frequency before age 50 and plateau by age 60, with onlay a modest age-related increase thereafter.

In general, bone loss associated with age is thought to be related to calcium deficiency. This results in subtle secondary hyper-parathyroid. With the associated skin aging and decreased exposure to sunlight, there is less Vitamin D mobilization and Vitamin D levels fall. This culminates in less absorption of Calcium from the intestine. Additionally, most older adults do not ingest adequate amounts of Vitamin D and Calcium in their diet, aggravating this condition.

Women, in addition, undergo increased absorption of bone, in the immediate postmenopausal years. This is thought to result from increased interleukin and cytokine activity caused by the loss of estrogen.

Generally, Osteoporosis is asymptomatic in the early stages, while the bone mass is still generous. But later, as the bone mass declines, individuals begin to present with fractures of the vertebral column, hips, and forearms. This contributes to extensive disability and increased mortality. Elderly ladies

don’t always slip and fall and break their hips, more often they turn their osteoporotic hip joint as cant and it breaks, and then they fall. Perhaps that’s the reason hip fracture frequency doubles every 5 years after 70, while distal radius fractures increase more modestly; the manner in which the hip fracture patient falls is different than that of the, outstretched hand fall, of the younger osteoporotic. The spinal vertebral compression fractures often occurs with minimal trauma, such as bending, lifting or even coughing. Forearm fractures, from minor falls, may be a sign of osteoporosis.

Often, the patient will present with back pain and disability, and with a high index of suspicion on the physician’s part, judging from the patient’s sex, age, general health, smoking habits, etc, an X-ray may be ordered which shows the collapsed vertebrae. Not all compression fractures are acutely symptomatic and the patient may not seek medical attention acutely.

Rapid loss of height and the onset of kyphosis over the years (Dowager’s hump) may be a clue to progression of Osteoporosis. Sometimes, serendipitously, the diagnosis is made from X-rays of other parts of the body, such as a chest X-ray, revealing a loss of bone mass (Osteopenia) and Osteoporosis or even a compression fracture, which was unsuspected.

It would be most advantageous to identify those individuals who are at greatest risk of developing Osteoporosis as early as possible, since it is asymptomatic until late in the process and it’s usual mode of revealing itself is so devastating (fractures, disability, pain, etc.). Therefore, presently those with identifiable risk factors may be subjected to bone density studies, such as the Bone mass density test (the gold standard) or the dual-energy absorptiometry test (DXA). The National Osteoporosis Foundation Guidelines for BMD measurement include those with Estrogen deficiency, Osteopenia on X-ray, long-term glucocorticoid therapy, asymptomatic primary hyperparathyroid9sm, and low-trauma fractures.

Bone Density: Osteoporosis is defined operationally as a bone density that Falls 2.5 standard deviations (SD) below the normal. (Known as a T-score of -2.5. Those who fall at the lower end of the young normal range ( a T-score of >1 SD below the mean) have low bone density and are considered to be at increased risk of osteoporosis. This test may be used to monitor the treatment of Osteoporosis. It is recommended that BMD Testing be done at least 12 to 18 months apart.

MECHANISM OF PATHOPHYSIOLOGY OF OSTEOPOROSIS

Bone loss is due to normal age-related changes in bone remodeling, which is additionally influenced by intrinsic and extrinsic factors. Modeling occurs by apposition of new bone tissue on the outer surfaces of the cortex. Factors that determine the peak skeletal mass and density are many. Genetic factors are the main determinant. Nutrition and lifestyle also play an important role. Increased sex hormone production at puberty is required for maximum skeletal maturation.

Once the peak skeletal mass has been attained, remodeling becomes the principle metabolic activity of the skeleton. Remodeling serves to repair the micro damage within the skeleton, to maintain skeletal strength and to supply Calcium from the skeleton, when asked, to maintain serum Calcium. The end result is that this remodeling process replaces lost bone with an equal amount of new bone and the skeletal mass stays constant. Hormones, Vit. D, nutrition all play a role in regulating this process. This process is in balance until 35 to 40 yr. of age. After that, bone loss exceeds bone formation, although it’s rate and magnitude differs between individuals.

The most common variety of Osteoporosis is secondary to postmenopause, which becomes clinically evident 15 to 20 years after the menopause in women. Men and women are susceptible to Osteoporosis when they age older than 70 yrs. with the female-to-male ratio of 2 to 3 : 1.

Secondary Osteoporosis occurs more commonly in Men and may be secondary to hypogonadism, postgastrectomy status, glucocorticoid use, and alcoholism.

Hopefully the individual at risk can be identified early, before symptoms develop, in an effort to reduce further bone loss and increase bone density to prevent fractures. Then lifestyle changes can be made, such as increasing activity and exercise, and cessation of smoking. The inclusion of adequate Calcium and Vitamin D in the diet are necessary. Current recommendations are for 1500 mg/day of elemental Calcium for postmenopausal women and men over age 65. Vitamin D requirements are between 400 and 800 IU/day.

Medications to treat primary Osteoporosis are directed at both increasing the BMD and the bone quality. They are:

Estrogen and Estrogen/progesterone combinations: This regime in Post-Menapausal females was initially considered the treatment of choice, and it worked fairly well. However, recently, the finding of breast and uterine cancer increase with these regimes, had dampened the enthusiasm for this approach. The unfavorable benefit/risk ratio has encouraged other forms of treatment. Studies are still underway, evaluating these medications.

Calcitonin: This substance derived from salmon, initially, and now produced synthetically has been associated with a decrease in bone resorption. It is approved only for the treatment of postmenopausal osteoporosis, not prevention It’s availability via nasal spray, has greatly increased it’s popularity. Calcimar is available by injection and Miacalcin is the spray variety. This category has shown efficacy in the spine, but not the hip.

SERM:(Selective estrogen receptor modulators): These are substances that produce tissue-specific estrogen-like effects on bone without influencing the uterus or breast. They are approved for osteoporosis prevention in women. They prevent bone loss associated with postmenopause. Evista (Raloxifene) is one of the more prominent members of this category.

Biphosphonates: There are substances which inhibit the action of osteoclasts, whose job it is, to break down bone. There Bisphosphonates decrease bone resorption. Foamex (Alendronate) is approved for both prevention and treatment of osteoporosis. It has been reported to be associated with a 48% reduction in vertebral fracture rate. This category has been especially beneficial in Corticoid-caused osteoporosis.

PTH: Parathyroid Hormone acts an an anti resorptive agent and thusly has been found to cause a decrease in bone remodeling and an increase in the BMD as well as the quality of the bone. It is considered anabolic therapy.