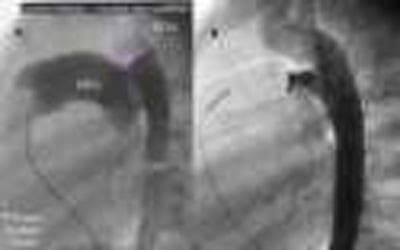 The Patent Ductus Arteriosus (PDA) is a normal structure in the fetus. It functions as a conduit or tube that bypasses the pulmonary (lung) arteries and directs the blood from the heart to the aorta (the main artery to the body). The purpose of the PDA in the womb is to maximize the efficiency of flow of oxygenated blood to the body. The lungs are bypassed because, in the womb, they are not receiving oxygen from the air. The oxygen for the fetal body is delivered via the placenta from the mother. The lungs are in an underdeveloped, compressed state in the fetus. The pulmonary arteries are very thick and impose a significant resistance to flow into the lungs. This is the mechanism that the fetus uses to divert flow from the lungs.

Infants born prematurely, lack the muscular development in the pulmonary arteries to divert flow from the lungs. Immediately following birth, after the first breath, the lungs expand and are no longer compressed. This, plus the scant muscle development in the pulmonary arteries, allow blood to flow into the lungs. This blood is extra and does not serve any purpose. In fact, the extra blood that flows into the lungs has two main deleterious effects; flooding the lungs and increasing the work of the heart to pump the extra blood. The premature newborn has no defense mechanisms and as the lungs continue their expansion over the first few days of life, the baby becomes ill. Usually the doctors notice labored breathing. Some babies require a ventilator or respirator to assist or even take over their breathing.

Doctors now have several types of treatment for the PDA. The oldest and still satisfactory treatment is to ligate or tie off the tube-like PDA. This requires entering the chest with an incision. This is usually a technically easy operation and some doctors perform it in the nursery isolette. A newer technique, being explored, is to use a fiber optic telescope to visualize the PDA through a small chest incision and then introduce tiny instruments through a second small incision. The PDA can then be ligated in a manner much like arthroscopy of the knee. The small incisions allow for rapid healing, thereby shortening the hospital stay for the baby.

If an older infant or child is found to have a PDA, a device inserted during cardiac catheterization can close it. This is often quite successful and avoids a surgical operation.

There is also a medicine, Indomethacin, that can be used to pharmacologically close the PDA. Occasionally, there are contraindications to using this medicine, such as the presence of poor kidney function. Often babies are put on a ventilator to protect their breathing because the medicine can cause spell of apnea (slow or absent breathing). If the treatment fails, surgical ligation remains an option.

In some cases of cyanotic (blue baby) congenital heart disease, the ductus arteriosus must remain open to keep the baby alive. Doctors can use medicines that resemble prostaglandin, the naturally occurring hormones that keep the tube open in the fetus. This is usually a stop-gap maneuver until an artificial PDA or shunt can be surgically produced.