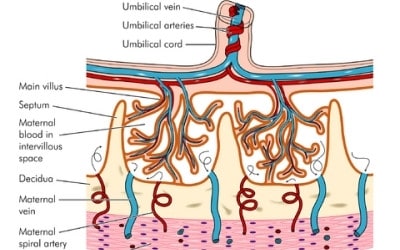 Placental Abruption is a term used to describe the unexpected separation of the placenta from the uterus. In order to be medically classified as placental abruption the separation must occurr after 20 weeks gestation. Placenta abruption is a very serious condition that can result in a stillbirth and death of the mother. It occurs in about 1% of all pregnancies and results in a 20-40% fetal mortality depending on the degree of separation.

In most cases of placental abruption, the placenta is only partially separated from the uterus. When more than 50% of the placenta is separated, the risk of stillbirth goes up drastically as compared to when the separation involves only a small part of the placenta. Abruptions are generally classified according to severity in the following manner:

Grade 0: Asymptomatic and only diagnosed through post partum examination of the placenta.

Grade 1: The mother may have vaginal bleeding with mild uterine tenderness or tetany, but there is no distress of mother or fetus.

Grade 2: The mother is symptomatic but not in shock. There is some evidence of fetal distress can be found with fetal heart rate monitoring.

Grade 3: Severe bleeding (which may be occult) leads to maternal shock and fetal death. There may be maternal disseminated intravascular coagulation. Blood may force its way through the uterine wall into the serosa, a condition known as Couvelaire uterus.

Known risk factors for abruption of the placenta include:
•Smoking
•Using cocaine during pregnancy
•Being over 35 years of age
•Having a multiple pregnancy
•High blood pressure
•Having a blood clotting disorder like antiphospholipid syndrome
•Placental abruption in a previous pregnancy
•Premature rupture of membranes

When a woman has symptoms of placental abruption, the healthcare practitioner will usually do a physical exam and an ultrasound. If doctors suspect serious abruption of the placenta, the usual treatment is to deliver the baby -- by C-section in some cases. However, delivery does not always mean that the baby survives. Mothers who have suffered a severe placental abruption may experience heavy blood loss, and babies who survive delivery may face complications from prematurity and oxygen deprivation.