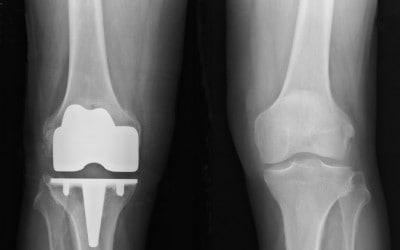 Knee joint replacement surgery involves using artificial knee joint components to replace an existing diseased joint. There are many reasons which may lead up to the decision to replace a knee joint including: knee pain that prevents or limits activities; and severe arthritis. By the late 1990’s approximately 300,000 Total knee arthroplasties, or total knee replacements were being performed in this country each year. That number has grown significantly since then.

In 1972, Dr. Insall introduced what has become known as the beginning of modern era of knee replacement joints with his “total condylar prosthesis.” Since then, many companies have introduced their own knee replacement products. Zimmer, HowMedics, and Depuy are a few of the early major players in this market.

Since the knee joint is made up of three compartments, the lateral, medial and patellofemoral, the modern prosthesis (beginning with Dr. Insall), replaced all three components. Some of the early challenges of these devices were testing the prosthetic joints before implanting them in humans. Various machines and equipment were designed and built in an effort to simulate how the knee would work “in vivo” or live inside someone’s body. As a major joint, the typical human knee joint takes a pounding on a daily basis.

The knee joints have traditionally been made up some combination metal and polyethylene materials. As designs have evolved, the use of these materials in particular parts of the knee components have changed. For instance, the late 80’s and early 90’s the patella (knee cap) component of some of these joints had a metal backing on it. However, these metal-backed patella components proved to be defective in that they would prematurely wear out. Today, most of the patella components are polyethylene.

Fixation of the prosthetic knee joint has also been part of the challenge in early designs. Most joints use bone cement to fix the prosthesis in place. Some of the early joints were made with a porous coated mesh that was designed to allow bony in-growth of the component. Although this porous coating was not FDA approved at the time, which meant they could not be marketed by the company for bony in-growth, physicians are not governed by the FDA requirements and were free to use it as an off label application. Cementless implantation of the device is less desirable due to loosening of the tibial component over time.

There is currently no consensus among physicians regarding the type of prosthesis to use. Current systems employ a modular design with a metal tibia tray and polyethylene inserts. Some designs may require that the surgeon sacrifice the Posterior Cruciate ligimate. Again, this is a matter of physician choice.

As with any moving part, all designs are subject to wear and failure. Most devices are designed to last in excess of 10 years and most last up to 15 years. Premature failure can be caused by physician error in implanting the device as well as poor design of the implant itself. To determine causes of implant failure, expert analysis is usually required.