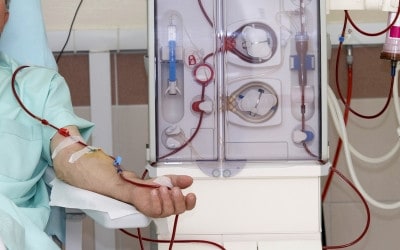 End stage renal Disease ( ESRD ) is diagnosed when kidney function drops to less than 15%. The Incidence rates of ESRD have increased steadily internationally  since 1989. United States has the highest incident rate of ESRD, following Japan.

Kidney disease is the ninth leading cause of death in US. As per  data from the United States Renal Data system ( USRDS )  there has been an increase of 104% in the  prevalence of chronic kidney failure between 1990--2001.

This increase is partially explained by the increase  in the prevalence of diabetes and hypertension, The two most common causes of chronic kidney disease. Other causes include ::  Vascular injury, Autoimmune disorders, Infections, progressive stone disease causing obstruction to kidneys.

Factors other than the underlying disease process that may cause progressive kidney injury include following :

Pain medicines over the counter other than acetominophen

Some types of  antibiotics

Chronic kidney disease leading to ESRD is a major cause of morbity & mortality at later stages. Patients older than 65, mortality rates are 6 times higher than in general population.

Chronic kidney disease leading to ESRD affects all races, but in US, significantly higher incidence exists in blacks as compared to whites. Incidence rate for blacks is nearly 4 times higher than whites.

ESRD is higher for males compared to females.

ESRD Is found in person of all ages with different underlying causes.

Poor over all well being.

Platelet dysfunction with tendency to bleed.

These days many pts are being followed by their physicians for the underlying causes ie diabetes & hypertension and other disease processes,   thereby are well prepared for the progression of their kidney disease.

Pts who are not seen by a physician prior to ESRD, can present much sicker & may also have ::  Congestive heart failure, pericarditis ( inflammation heart linning ),  encephalopathy , semicomatosed state, severe acidosis, bone disease and  severe anemia  secondary to accumulation of toxins to  dangerous levels.

Dialysis -----  a) Hemodialysis  b)  Peritoneal dialysis

Hemodialysis ----  is a procedure that cleans & filters your blood. filter used is called artificial kidney.It is attached to dialysis machine. It gets rid of harmful wastes, extra salt & fluids. It also controls blood pressure and helps your body to keep the proper balance of chemicals and fluids.

Hemodialysis  usually is done three times a week, each time 3--4 hours.It can be done at home or at center. At a center nurses perform dialysis. At home you and a family member is trained to perform the proceedure.

Peritoneal Dialysis ----  This type of dialysis uses the lining of your abdomen to filter your blood. A cleansing solution called dialysate travels thru a tube into your abdomen. After  4 hours the fluid gets drained  with wastes and extra fluids, which your body had accumulated.

This proceedure is called Exchange. It is generally done 4-5 times a day.

Transplantation ----  It is a proceedure that places healthy kidney from another person into your body. This new kidney does all the work that your two failed kidneys cannot do.