Reporting of Physician to National Databank 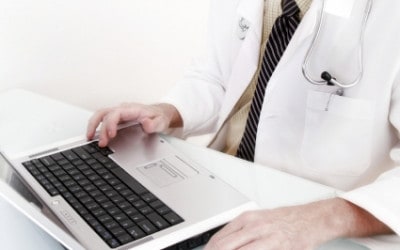 In 1986, Congress created the National Practitioner's Data Bank (the NPDB).  According to its web site, the NPDB was created because  "the U.S. Congress believed that the increasing occurrence of medical malpractice litigation and the need to improve the quality of medical care had become nationwide problems that warranted greater efforts than any individual State could undertake."

"The intent is to improve the quality of health care by encouraging State licensing boards, hospitals and other health care entities, and professional societies to identify and discipline those who engage in unprofessional behavior; and to restrict the ability of incompetent physicians, dentists, and other health care practitioners to move from State to State without disclosure or discovery of previous medical malpractice payment and adverse action history. Adverse actions can involve licensure, clinical privileges, professional society membership, and exclusions from Medicare and Medicaid."

Although the intent of Congress was to help improve health care, there are several practical problems created in medical malpractice litigation resulting from this legislation.  First, information regarding a physician is confidential and not available to the public and not discoverable (except in certain very limited circumstances) in a law suit.  Thus, the public can not search the data bank to determine if a physician has committed malpractice.

Second, reporting requirements to the NPDB greatly inhibit the patient's chance at settlement without risking a trial.  According to the rules of the data bank, if a physician pays one penny in settlement to an injured patient he gets reported to the NPDB.  If the attorney or insurance company making the settlement fails to report him, there are stiff fines ($10,000) per instance which can be levied against them.

Hospitals and medical malpractice insurance companies do have access to the data bank and are required to check it whenever a physician is getting credentialed at the hospital or whenever his insurer is renewing his policy of malpractice insurance.  Since the physician does not want any marks on his record, most are willing to "roll the dice" at trial rather than risk a reporting to the data bank.

Another problem with the data bank is that hospitals and its employees are not reported to the data bank if they pay any money in settlement.  So if a nurse commits malpractice, generally as an employee of the hospital, she will not be reported.

The NPDB, while well intentioned when passed, has not had the intended effect on improving health care in this country.  In fact, it has been a major inhibiting obstacle to a patient receiving compensation from a physician who has admittedly committed malpractice.

For more information on the NPDB visit their web site at www.npdb-hipdb.hrsa.gov.