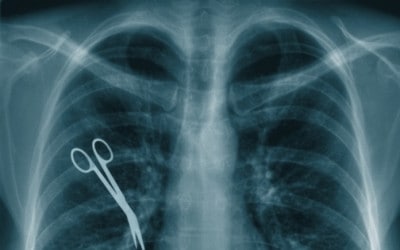 Failure to remove surgical instruments at the end of a procedure is a more common occurrence than one might suspect. A recent study reports that this may occur in as frequent as 1 out of every 100 cases or as few as 1 out of ever 5000 cases of surgery. Surgical sponges are not the only items which are left following a procedure. Needles, knife blades, safety pins, clips, electrosurgical adapters, cotton and gauze and other items have all been reportedly left inside patients following a surgery.

Surgeons and nurses typically rely upon the practice of counting the sponges and needles used during a procedure before closing up the patient to ensure that all such items are accounted for. However, some surgeries can involve the use of as many as 600 sponges. Obviously, that makes the task of counting such items particularly more difficult. This process gets potentially more complicated because the surgical nurses usually perform the counts, not the surgeons who are actually using these items.

The process by which counts are performed is not standardized by the Joint Commission on Accreditation for Healthcare Organizations (JCAHO). Individual hospital policies may vary widely on their instrument counting procedures. Even when counts are performed, they are frequently abbreviated in emergency or transvaginal surgeries.

In recent years, surgical sponges have been imbedded with a radio-opaque strip which can easily be seen by an x-ray. Some hospitals routinely perform portable x-rays in the operation room before completing the procedure to ensure no sponges have been retained. Newer technology includes the use of a chip imbedded into a sponge which transmits a signal to a receiver. This is also used in the operation room and makes the use of an x-ray (and its potentially damaging effects) unnecessary. However, these new sponges are expensive and raise a whole new set of issues if it fails to perform correctly. Moreover, they are not required and not used in every hospital.

Once symptoms raise suspicion of a retained foreign object, an x-ray, CT scan or other radiographic type procedure will usually confirm the presence of such and object. Then, the patient is usually taken back to surgery to have the object removed. Of course, this is usually done under a general anesthesia thus exposing the patient of another potential risk of death or injury.

Most states extend their statues of limitations where a foreign body is left in someone for a period of time after discovery of the foreign body. Louisiana does not extend its statue of limitations and sets and absolute maximum time limit of three years from the date the sponge is negligently left inside a patient. This hold true even if the foreign body is not discovered until more than three years after it was left in the patient. This may present an extreme case of injustice from a clearly negligent act.

If you or someone you know may be the victim of a retained foreign body, contact The Cochran Firm - Metairie toll free at 1-866-599-0022 for a free consultation by one of our experienced surgeons.