Does the Supreme Court Get to Hear My Case? 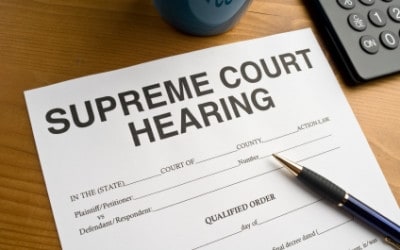 In most states, a litigant who has lost a trial at the trial court level (decided by a judge or jury) has the right to appeal that decision to an intermediate court.  There are specific deadlines and reasons which must be met in order to properly perfect such an appeal.  There are also a couple of different types of appeals, one which suspends the execution of any judgment and one that does not.

Once an issue is decided by the intermediate appellate court, a litigant's options are limited.  Except in death penalty cases, there is not an automatic right to an appeal of the appellate court's decision to the State Supreme Court.  A litigant which seeks review by the Supreme Court  may apply for what is called a Writ of Certiori.   This Writ is a brief wherein the litigant asks the court to hear the case.  The State Supreme Court has specific rules that it publishes that establishes the types of cases and issues which a litigant can ask them to review.  If the issues involved in the case do not fall in that category, then the litigant may not seek a Writ application to that court.

Settlement Reached with City of Atlanta for Police Shooting