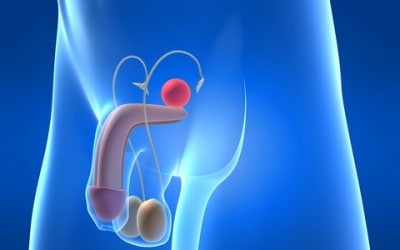 The purpose of the prostate is to produce a fluid that prolongs the life of sperm after ejaculation. In men, the prostate is a small, walnut sized gland located underneath the bladder, which wraps around the urethra (the tube that carries urine from the bladder during urination).

As men age, frequently the prostate gland begins to enlarge, a condition called benign prostate hyperplasia (BPH). As the prostate gland enlarges in BPH, it begins to squeeze the urethra, which results in a reduction in the flow of urine through this tube. By age 50, nearly half of all men have symptoms of BPH. These symptoms include a weak urine stream, frequent need to urinate, awakening at night to urinate, and straining to urinate.

In many cases, if the enlarged prostate is causing severe symptoms, the condition can be treated with medication. Some drugs work by relieving the symptoms of BPH, but do not actually shrink the gland. In more severe cases, drugs can be used to shrink the gland by reducing the levels of dihydrotestosterone. These drugs are effective, but can take up to 3 months to provide relief. Other non-invasive methods of treatment include laser therapy, microwave thermotherapy and transurethral radio frequency needle ablation (TUNA). These procedures are performed in a doctor’s office, and are effective.

In more severe cases of BPH, surgical intervention is the best treatment. The most common treatment is the transurethral resection of the prostate (TURP). TURP is performed under anesthesia, and requires a short hospital stay. It is a common procedure for treatment of BPH, and has fewer complications than general surgery. In this procedure, a resectoscope is inserted into the penis. A resectoscope is a slender rod that has a light, an electrical loop that can cauterize tissue, and valves for flushing with fluids.

Once the resectoscope is inserted into the penis, using a series of small maneuvers, the surgeon can enlarge the urethral diameter by shaving down the overgrown prostate gland. As the tissue blocking the urethra is removed, the urine can flow without difficulty from the bladder, alleviating the symptoms of BPH.

After the procedure, a short hospital stay of 1-2 days is usually required. During this time, you will be examined for complications such as infection or bleeding. Some clots of blood in the urine are to be expected, but should resolve prior to your discharge from the hospital. After your discharge, you should be careful about straining during bowel movements, and you should not lift heavy objects. You should also avoid any sudden movements that can affect your lower abdomen. Drinking lots of water can also help flush your bladder of any old clotted blood.

For a period of time after the surgery, you may notice you have changes in your urination or sexual function. These may include incontinence or the inability to have an erection. These changes are generally short lived, and resolve within a few months.

Frequently, men who have had the TURP procedure performed develop a condition called retrograde ejaculation during intercourse. This is when the sperm are ejaculated into the bladder, instead of through the penis. Although this condition is not dangerous, it can result in infertility.

TURP procedures are generally very safe and have low complication frequencies. A well-trained physician should be able to determine how much of the gland needs to be removed, and will treat the patient accordingly. Occasionally over-aggressive shaving of the gland can result in incontinence that does not resolve. In these cases, the sphincter muscles have also been removed during the procedure, resulting in the loss of urinary control. In these cases, evaluation of your condition by another physician may result in a determination that medical malpractice has occurred.