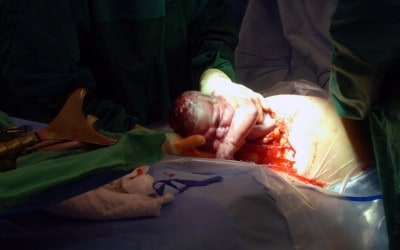 Uterine rupture in pregnancy is a rare, but potentially catastrophic event during child birth.  It is a life-threatening event for both mother and baby.  It occurs when the integrity of the myometrial wall is breached.  There are varying degrees of rupture ranging from an incomplete rupture in which the peritoneum remains intact, to a complete rupture where the contents of the peritoneum spill into the peritoneal cavity or broad ligament.  Statistically, it occurs in 1 out of every 1,536 pregnancies (0.07%).  However, in modern industrialized countries, the uterine rupture rate during pregnancy with a normal, unscarred uterus is 1 in 8,434 pregnancies (0.012%).  The vast majority of uterine ruptures occur in women who have uterine scars, most of which are the result of previous cesarean deliveries.

The initial signs and symptoms of uterine rupture are typically nonspecific, which makes the diagnosis difficult and sometimes delays definitive therapy.  However, uterine rupture is associated with significant uterine bleeding, abdominal pain, fetal distress, expulsion or protrusion of the fetus, placenta or both into the abdominal cavity and the need for cesarean delivery due to fetal distress.  Intra-abdominal bleeding can also lead to hypovolemic shock and death of the mother.

There are several risk factors associated with the development of uterine rupture, but by far the most common risk factor is a previous cesarean section scar in the uterus.  Other risk factors include other forms of uterine surgery that result in full thickness incisions and scarring, fetal macrosomia, dysfunctional labor, labor augmentation by oxytocin, high parity, breech extraction and uterine instrumentation.

The most critical aspects of treatment is establishing a timely diagnosis and minimizing the time from the onset of signs ans symptoms until the start of definitive surgical therapy. As a rule, the time available for successful intervention after frank uterine rupture and before the onset of major fetal morbidity is only 10-37 minutes.  Thus, once the diagnosis is considered, all resources must be quickly mobilized to successfully institute treatment.  Treatment consists of emergency exploratory laparotomy with cesarean delivery of the child.  This is accompanied by fluid and blood transfusion as indicated.