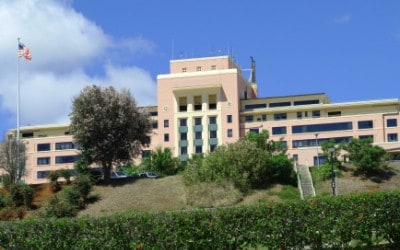 The Department of Veterans Affairs, also known as the VA or Veterans Administration operates approximately 150 medical centers throughout the United States.  In addition to these medical centers, the VA also operates hundreds of other clinics and nursing homes.  These VA healthcare facilities provide healthcare to America's veterans.  However, there are certain requirements to be eligible to be treated at one of these facilities.

A veteran is defined as a former member of the armed services, which includes the army, navy, air force, marines and coast guard. Thus, Veterans hospitals do not generally treat the public (except in extreme emergencies). However, not all veterans are automatically eligible for health care at a VA facility. In order to qualify, a veteran must first have served in the active military, naval or air service for a certain amount of time. Veteran who have been dishonorably discharged are not eligible. Also, eligibility may be limited for those veterans who make too much money or who do not become sick or injured while on active duty. Congress frequently changes the somewhat complicated eligibility rules to receive care at a VA healthcare facility.

Claims against VA facilities are governed by a federal law known as the Federal Tort Claims Act, the FTCA. The U.S. Constitution generally provides sovereign immunity for claims against the federal government. This means that the Government can only be sued in circumstances in which it has, by statute, consented to be sued. The FTCA is one such statute in which the federal government has allowed lawsuits against it. The FTCA governs all tort claims against the federal government for personal injury, including claims of medical malpractice. This law has many specific rules which must be followed in order to bring a claim. For instance, a claim under the FTCA cannot be brought in a court of law without first going through an administrative review process. There are specific forms which must be properly filled out and submitted in order to institute such an action. Under the FTCA, if the administrative review process is not completed in 180 days from the date it is filed with the appropriate administrative agency, then the patient may ask that agency to issue a “right to sue”  letter which will then allow the patient to bring the claim in the appropriate federal district court. Generally, the federal district court sitting in the venue where the malpractice occurred is the appropriate court in which to file these actions. The United States is the only proper party defendant against whom the lawsuit may be brought (not the doctors or nurses individually). These cases are tried to a judge, not a jury.

Attorney’s  fees are also specifically limited in these cases. An attorney may not legally charge more than a 20% contingency fee to a client in a FTCA case that settles before a lawsuit is filed and no more than a 25% contingency fee after the suit is filed. Given the time and expense associated with these cases, many attorneys do not handle such claims. The Cochran Firm – Metairie has much experience in handling these types of claims. Call us for your free consultation.