SWD Alums Give Back Through Mentorship 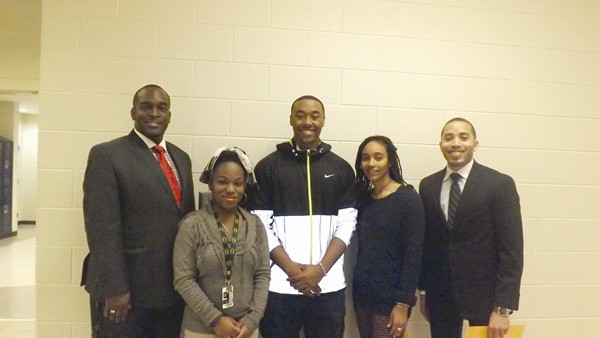 Two Southwest DeKalb High School seniors are recipients of a $250 scholarship after winning an essay contest.

Alida Brown and Tyler Sylvester wrote the best essays on what the first amendment means to them and how it applies to their lives. Both students were excited about winning the award.

“I am actually very surprised,” Brown said. “I’m happy that I won and I feel proud that I won because I was honestly talking about the importance of everything in my life and how the first amendment makes me feel like I’m important.”

Students of Dr. Kenyatta Arnette’s business and computer science classes were given the assignment by Southwest DeKalb alums India Ali and Omari Crawford.

Ali and Crawford, who are both now attorneys, returned to their alma mater in September to form the Project L.I.F.E (Learning Is For Everyone) program with the purpose of exposing students to various professions.

The two, who have known each other since they were 8 years old, graduated from Southwest DeKalb in 2004. After both received their juris doctorade and M.B.A degrees from North Carolina Central School of Law in 2013, they returned to Atlanta to begin their law careers and to find a way to give back to their high school.

“One of the things we talked about is the fact that many students from certain neighborhoods don’t have the same exposure to professionals as other neighborhoods,” said Crawford, who works at The Cochran Firm. “I came from a home with two working parents, who were college-educated, but I didn’t have access to an attorney—someone I could call on the phone or sit down with and call a mentor until I got to college—undergrad at Florida A&M. That’s the first time I really had the opportunity to sit and talk with an attorney.”

Crawford said he and Ali, who works for The Law Offices of Stephen H. Robinson, thought it would be beneficial if they came back to the school that they were involved in and teach the students about the legal world.

“It’s about coming back, giving back and teaching and making sure the students have the opportunity to learn something that might be a field they would like to get into,” Crawford said.

“From what we’ve been told, from whenever we just come up to the school to watch a basketball game, we’re always being told that [the student body] is different now,” Ali said. “The students are different and they need more people who have graduated and have gone on to do successful things, to come back and talk to the kids because it’s a different generation. They are more exposed to things that we weren’t exposed to as far as social media and all of these other things that we didn’t have to grow up dealing with.”

Although there are mentors in the community, Ali said students would benefit more from those who have walked the same halls as they are walking at Southwest DeKalb.

“I think [the students] can get ‘lost in the sauce’ because they’re paying more attention to what’s on the television or social media—the things that are popular,” Ali added. “And maybe they don’t have direct access to somebody who went to this school, who understands what they’re going through and someone they can relate to. We’re not that far removed from the school.”

Arnette, who taught Crawford during his senior year, said having the former students come back to mentor current students is the highlight of a teacher’s career.

“They’ve become success stories and to see them come back is a great honor,” Arnette said.

Brown said having Ali and Crawford around has further expanded her horizon about potential future opportunities.

“They’ve also helped me further understand the things that I can do,” Brown said. “Seeing a person in a position that you want to be in is inspirational and gives you a higher belief that you can do something,”

“I loved it,” Sylvester said. “The L.I.F.E Program is amazing. Every time they came it was very live. They were hands on and made it fun, made the class better.”

Ali and Crawford hope to expand the program to other schools.